Crimson Desert is an upcoming MMORPG with an open-world concept that is currently being developed by Pearl Abyss, the makers of Black Desert Online.

Crimson Desert will feature an extensive and immersive single-player story campaign revolving around Macduff, son of Martinus, the leader of a ragtag band of Mercenaries. The campaign will feature a variety of engaging Quests based on both the exploits of the many mercenaries for hire, and on content that traditionally initiates quests in an MMORPG format. Crimson Desert is a story of growth and resilience. A story where mercenaries, plagued by hardship and pain, endeavor to survive in a hostile world.

The world of Crimson Desert is full of mythical creatures, both big and small, who threaten the livelihood of characters in-game. There are also completing bands of bloodthirsty mercenaries across the land and other powerful figures acting from the shadows. Players must make strategic choices using an action-driven combat system, while either working with, or against other players who inhabit the same world.

Crimson Desert is being advertised as a prequel to Black Desert Online, but although players may get to visit some locations from the original game, there will be entirely new worldviews, religions and characters unique to the world of Crimson Desert.[1]

"A vast but divided continent... A harsh desert... Cities as dangerous as they are breathtaking... In the world of Crimson Desert, gritty realism often precedes aesthetic beauty.

Crimson Desert tells the story of Pywel, a vast continent of divided regions inhabitated by people struggling to survive in its ever-changing lands. From the vast plains of Akapen to the inhospitably cold lands of Kweiden, or the barren Desert, each region possesses its own unique beauty. However, you might have to scrape away the grime to see it!

As you traverse the cities of Pywel, be it the Desert Oases or Kweiden’s Ulsrund, land of the wolf, expect to encounter filthy alleys, destitute hovels, and marketplace language that would make even a Troll blush. Each location has its own unique character that is both fantastical and grounded in gritty realism.


Will you explore these strange new lands alone or venture into them with other players? However you decide to explore these ancient mysteries, just remember that whether you intend to or not, your actions will influence the story of Pywel.

This is Crimson Desert. This is where legends are made."[2]

A Struggle of All, for All

"A story of all struggling to survive in their own unique ways.

A new generation of weapons has emerged alongside the old: pistols beside swords, cannons beside axes, and even hand-mounted cannons. Furthermore, the advent of the mysterious art of alchemy has allowed some gifted practitoners to imbue these already deadly weapons with additional abilities. Suffice to say, you will never be short of a weapon or two in the world of Crimson Desert.

With a vast range of weapons and countless customisation options, what you wield and how you wield it all depends on the type of warrior you want to be.

But you better be ready soon, for not all is what meets the eye in the world of Crimson Desert. Alongside the heralding of a new age of warfare, tales are also spoken of beings from a distant world, perhaps even a world that exists in a time yet to be.


So, make sure you’re well armed for the journey ahead."[3]

"Not all will be prepared to endure the trials and tribulations unleashed by your enemies. Answer your calling and lead a band of battle-hardened mercenaries against those who seek your downfall.

You won't be able to take on the many threats that exist across the lands alone, but you're in luck, since you'll have a group of your own mercenaries to rely on.

The King of Demeniss, Unifier of Lands, lies in a coma. In the ensuing power vacuum, those who have suffered under his iron rule now seek to exploit his weakness. Some who have felt the oppression of his conquests seek only independence, but others dream of gaining their own absolutist rule. In this time of turmoil, you will not survive against such powerful foes alone. You better assemble a team.

You must travel the world if you wish to find the most battle-hardened fighters to form your mercenary company, but to earn the trust of such esteemed warriors you must first become one yourself. Every mercenary you meet will have their own story to tell, their own unique reasons for choosing this path. If you wish to shape these warriors into an elite fighting unit and hear those tales, you will need to earn their respect. Only then will they fight under a single banner. Yours!


History is about to be made in the world of Crimson Desert, but it won’t be made alone."[4]

"The justice of those who dream of ruling is often distorted by desire. Learn to survive against a threat of mythical beasts, maniacal rulers, and hostile mercenaries.

A Pywellian scholar once wrote “forget not that today’s enemy may be thine ally tomorrow”. Wise words indeed, yet the opposite can also be said to be true. As you traverse Pywel, you will find that threats abound in all shapes and sizes. Be it the so-called “just” rulers promoting their own distorted brand of justice built on a foundation of death and bloodshed. Or the hostile forces threatening your lands both from within and from afar, such as a certain Desert-based cult that worships a powerful ancient god.


If you’re lucky, you might only encounter one of the ferocious mythical beasts that have awakened from their eternal slumber by the wars of humans. Though of course, luck is a matter of perspective in this instance. As you travel through Pywel, be sure of one thing: many dangers await you in the world of Crimson Desert."[5] 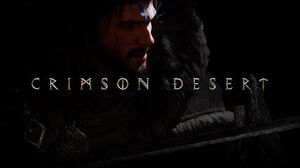 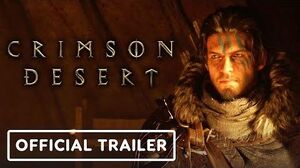 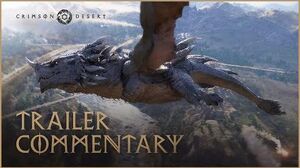 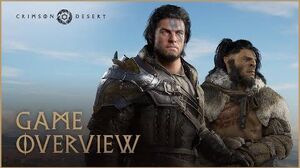 Retrieved from "https://crimsondesert.fandom.com/wiki/Crimson_Desert?oldid=361"
Community content is available under CC-BY-SA unless otherwise noted.